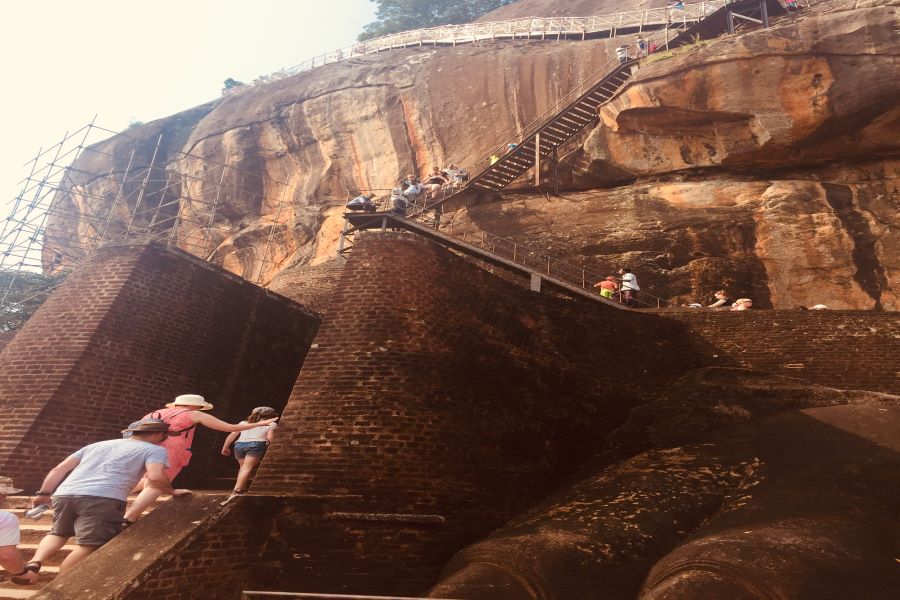 Sri Lanka was, in 2018, named the top holiday destination for 2019 and rightly so. Its diverse landscape of rolling hills, mountains, paddy fields tropical forests and palm fringed beaches along with rich culture, history and its exotic wildlife make it a top touring destination. It had been on our radar for a while!

After a direct flight to the capital Colombo, we headed straight to the tea country where we stayed in a colonial bungalow on a tea plantation, instantly experiencing a slower pace of life and tranquil surroundings.  Our days started with complimentary yoga overlooking the undulating landscape, where women picked the young leaves from the tea plants.  We explored the surrounding forests, pulling wild growing ginger and lemongrass straight from the ground (the intensity of the aromas was incredible), relaxed sipping Ceylon tea with the background chorus of the jungle and ate delicious authentic Sir Lankan food.

Our next stop was the north east coast, stopping at Dambulla Cave Temple en route.  The north east of Sri Lanka is a world apart from the rest of the island.  Closer to India, it has retained its own unique character and, due to Tamil influence, the area’s culture is a rich mix of Hindu India and Buddhist Sri Lanka and offers a peaceful and uncrowded beach experience.

We were here primarily for the beach and had two very different beach experiences – one on a long white sandy beach with calm turquoise waters and the other, a more rugged beach edged with jungle, our villa nestled within the jungle, a stone’s throw away from the sea.  We swam in the sea, relaxed on the beach, played volley ball with the locals and took a private trip to the marine reserve Pigeon Island, one of 2 marine national parks in Sri Lanka.  We saw an abundance of coral reef fish and marine animals including green sea turtles feeding on coral and black tip reef sharks.

There are a number of towns dotted along the east coast and Trincomalee is one which has been instrumental in Sri Lanka’s history.   This natural deep water harbour, with its sleepy back streets lined with villas, has been a major commercial hub since 543 BC.  The control of it was much sought after during the colonial era and more recently, it offered a base for British and Allied troops during WWII.   We wandered around the Portugese built Fort Frederick and within its walls, the grand Kaneswaram Temple.   The temple contains ornate shrines and a massive statue of Shiva, making it an important site for Hindus.  Its elevated position also makes it a popular site for spotting blue whales, drawn to the deep waters of the town.

Next, we headed inland to Sri Lanka’s cultural triangle as no Sri Lanka is complete without a visit to the iconic Sigiriya Rock (Lion Rock) – it’s the biggest attraction both physically (200m high) and metaphorically and offers the most spectacular views out over impressive moats, rampart ruins, ancient shrines, intricate water gardens and surrounding countryside.  It’s mind blowing that its summit was once the site of an ancient royal palace, constructed without the benefits of modern equipment.  We visited the colossal ancient city of Anuradhapura, Sri Lanka’s first capital city (no surprise it’s gained a UNESCO world heritage site title), draped with prayer flags and dotted with candles.  With two teenage boys in tow and the help of a private guide we navigated our way through the ruins, ponds and temples by bicycle.  Here, we saw some of Sri Lanka’s best and oldest examples of stupas (dagobas) and the Jaya Sri Maha Bodhi, the world’s oldest known human planted tree, cut from the tree under which the Lord Buddha gained enlightenment.

The 8 national parks throughout Sri Lanka provide an array of wildlife including elephants, leopards and sloth bears.   Seeing the elephants in the wild in Kaudulla was one of my most anticipated parts of our trip but nothing could have prepared me for the moment we emerged from the jungle to see a herd immediately in front of us.  I was quite literally gobsmacked and relished watching these wonderful animals, including a 1 month old baby mimicking the adults foraging, feeding and trumpeting!

Sri Lanka is certainly regaining its smile, establishing itself once again as one of the world’s most desirable holiday destinations.  Go soon, before the world discovers this truly amazing pearl.

Debs travelled to Sri Lanka with her family in October