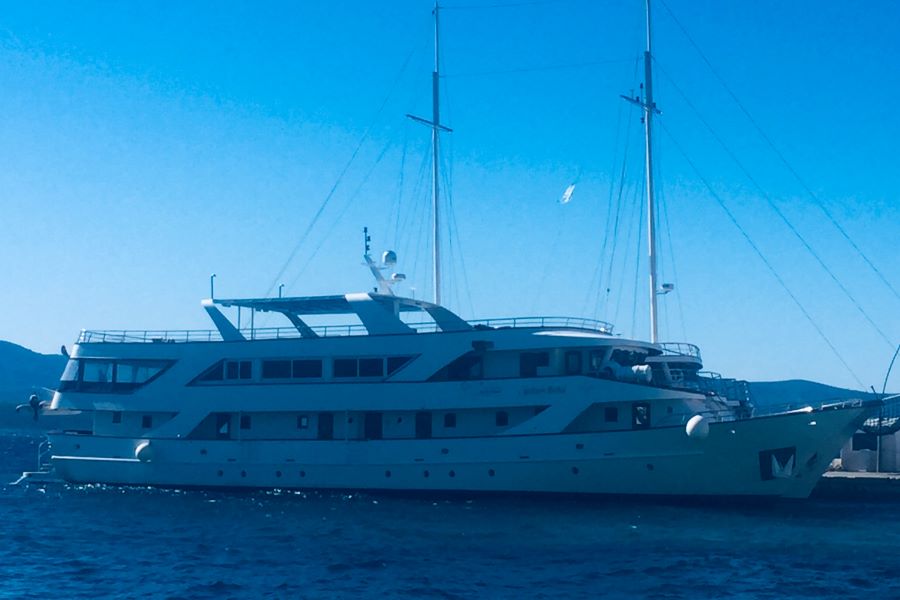 A cruise on a small motor yacht, specifically designed for cruising in Croatia, is the perfect way to visit the islands and to access destinations where the larger cruise ships can’t!

Our yacht for our trip accommodated 38 guests in 18 spacious cabins and included an upper deck, air-conditioned salon-restaurant, separate lounge-bar area as well as an outside covered terrace with tables and chairs.  The sun deck had enough sun-beds for all guests and the jacuzzi provided the ideal spot for taking in the magnificent views as we cruised along. At the back of the ship a large swimming platform allowed easy access for swimming in the crystal clear waters.

On arrival day we dropped our bags at our boat in Split Harbour and then spent the afternoon on a guided walking tour of the town.  We learnt that the Ottomans, Venetians, French and the Austro-Hungarians were all very vividly present in Split and the Dalmatian region and how each of them left their trace in Split’s architecture and culture.   In the early evening we returned to the boat to meet the Captain/his crew and to have dinner on board.

Next morning, we set sail for Bol, a place best known for its beach of Zlatni Rat (Golden cape), which regularly hits the top lists of the most beautiful European beaches.   Once at Bol we enjoyed a leisurely morning taking in the sights and strolling around the town.  Then it was back on board for lunch whilst we cruised past many scenic coves and bays on route to Hvar.

Hvar is classed as one of the sunniest Croatian islands, one of the country’s most attractive tourist destinations and a meeting point of international jetsetters. Upon our evening arrival at Hvar, a local  guide walked us through this unique town and introduced us to its millennia long history, culture and a way of life, along with few island’s peculiarities such as the traditional farming of lavender. We had the evening at leisure to explore further and dine in one of the numerous family owned restaurants and taverns in Hvar Historical Town.

Our third day commenced with an early morning departure for the Island of Korčula. Before lunch we stopped and enjoyed a swim in one of the pristine bays and then continued our journey to Korčula.  Korčula is known as the birthplace of Marco Polo, one of the world’s most famous explorers of all times. Our guided tour of Korčula Town took us through the many narrow and cobbled streets of this medieval walled city.  A climb up to the top of the Bell Tower is a must to experience the 360 degree views of the surrounding area. Our evening was at leisure to sample the excellent restaurants, some award winning, and bars of the Old Town.

Day four was the longest cruising day and as we made our way along the shores of Mljet and the Elaphiti Islands we were able to, once again, stop and take a dip en route to Dubrovnik.   On arrival in Dubrovnik we were met at the pier by our guide and were taken to visit the historical centre, the world famous city enlisted as UNESCO’s World Heritage Site. Following our city tour we had some free time before our flight home so we continued to explore Dubrovnik. We walked around the famous City Walls and took a scenic cable car to the top of Mount Srđ with its stunning 360° vista.

Cruising from one island to another to experience different local sights, old towns, guided tours swim stops, lazy lunches on board  and to have evenings spent at leisure on different islands is a fantastic way to visit the islands of Croatia.  October was a fabulous month to go as the weather was lovely and warm during the day, a little cooler at night, the crowds less than in the summer months and we had some of the most amazing sunsets I have seen in recent years.

Helen travelled to Croatia in October.